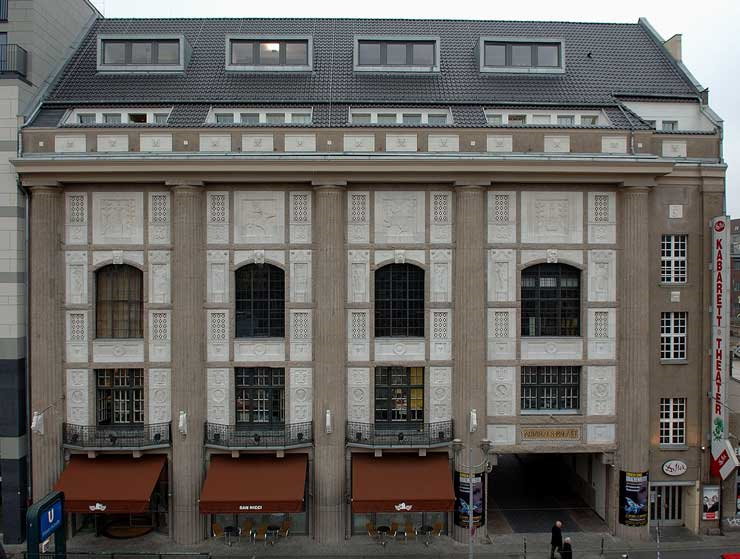 Feed Us
Borders Are (Poem)
Serj: Borders surround.  Borders bound.  Borders marginalized.  Borders frame.  Borders divide.  Borders kill. Borders are the ultimate man made wall separating and differentiating us beyond our cultures, beyond our beliefs.  Borders are subjective, unnatural lines drawn by humans delineating land, water, and air for partisan collective utilization.  If borders were natural, other animals, in fact all beings would be bound by them.  Indigenous cultures never recognized borders.  Cognizant of the fact that the land owns us and not the other way around.  Borders lead to war, occupation, bigotry, even genocide.  Worst of all, borders are a deceptive yet constant reinforcement of the notion that we are alone.  Separate from each other and all things around us.  The multi-layered borders of our lives stratify separation in its undignified multiple definitions.  There are people dying in Kashmir due to border disputes.  Shots are fired daily between North and South Korea.  The Berlin Wall separated the German people for a half a century.  Israel and Palestine continue to endure conflict over their borders.  Ottoman, modern day Turkey felt they had to carry out genocide to protect their borders.  Their borders, their fucking borders.  Borders represent the foundation of civilization, expansionism, abuse of capitalism, and presumptuous occupation.  Floods don't recognize borders.  Earthquakes don't recognize borders.  Diseases, famine, drought, don't recognize borders.  Why the fuck should we?  ????? [In German].  What's up ??????  I wanna thank the Czech National Symphony Orchestra for coming along.  Antonin Hradil, Jan Chalupecky

Serj:  Thank you.  Thank you.  You guys are-you guys are ????? ????? ?????.  I don't know if you know this: classical music was played in theaters like this and people weren't silent.  They were like you, they used to talk, they used to eat, they used to call out to the band.  And it's so sad that classical music's turned into an elitist persuasion.  So, we're changing it around today with our music, our songs, and you guys.  Thanks for-thanks for being here.
Money

Serj:  Thank you.  You guys are awesome, thank you.  Uhm, so this is a brand new song that we have fore you called "Peace Be Revenged".  It's an orchestral version of the song that's gonna be on the record called "Imperfect Harmonies" in September...
Peace Be Revenged
The Charade

Serj:  Thank you.  These guys are like ????? rockers they are playing it so fast, it's incredible.
Honking Antelope
Saving Us
Disowned Inc. 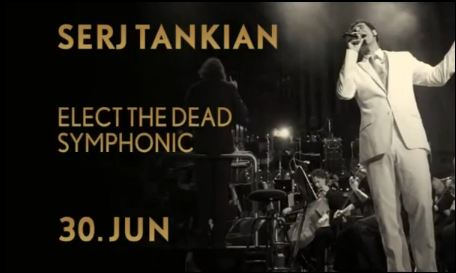 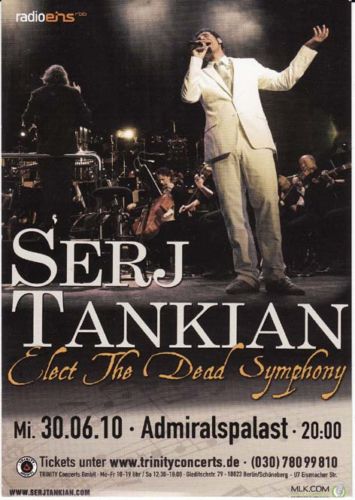 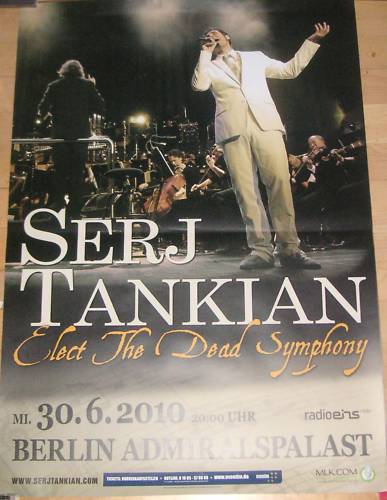 Berlin there are fond of pointing to the style of the culturally Outstanding - because it fits like a harp in the orchestra, that ex-system-of-a-Down singer Serj Tankian has chosen the historic Admiral Palace, to play a concert with a rarity: He leads his first solo album "Elect the Dead" (2007) to completely rearranged for classical instruments. He himself is the front man of the orchestra, as is understood.  With these performances, the singer is currently touring the world - and already is playing a few songs from the new album "Imperfect Harmonies", which is to appear in August or September 2010.

Before the Palace of the Admiral expected unaccustomed sight: Gothic girls were raised with metal-Kids in a row, Armenian compatriots are looking forward to Serj and a few suits can also be seen.  In the venerable Palace of Culture to look for bikers volltätowierte their seats, while others are still discussing who is sitting at whose place.  Culture has finally prescribed seating arrangements.

Clock at 20.15, the orchestra is welcomed - and like football stars in the stadium, while Serj Tankian himself as the great master of ceremonies is received, as he is now also shown.  75 minutes he will play songs from his two solo albums.  Without electric guitar.  Without a drummer in the metal sense.  With classical instruments.  This is not rock and roll in the usual sense live, because there is little movement and only a Spartan light show works, but is excellent at least three of four songs.

Some of the "Elect the Dead" songs are still too much written for a rock band, so in the verse / chorus / verse brace caught, and to enchant classical instrumentation limited, but that is the exception. Just "Money," "Lie Lie Lie" and especially "Honking Antelope" work very well. The new songs such as "Gate 21" or "Borders Are" with its almost "The Doors moderate" poem-lectures are specifically designed for the large production unde accordance with kin and final are only the "Elect the Dead" hit "Empty Walls "as an encore topped.

No on-tape, just under € 50 entrance fee, only almost every song has fired - was it worth it?  Yes, it was.  The boundaries between different audience groups Serj Tankian burst as easily as that between rock, jazz, musical, dance and orchestral music, of course. He managed a coup, which he in the new song "Borders Are" explicit: to ignore boundaries. So really no one goes home disappointed. And by the way the likeable singer gets in the white suit even the loudest applause, which you can get in Berlin during a performance only.   Was it that finally a "rock" concert "in a concert hall with great acoustics took place?  Actually, no matter the great evening all around.

Sadly, we were not allowed to photograph this show, but we felt this shouldn’t keep us back from trying to let you in on the fun anyway, so here goes.

“In the old days people used to be noisy, drink and eat in places like this, just like you do now. It’s sad how it has turned into such an elitist establishment, but we’re trying to bring some of the old times back tonight!”

Thus spoke Serj Tankian to the assembled crowd in front of him.
We were all gathered in the beautiful theatre-hall of Admiralspalast in Berlin, where for this night the chairs and suit-and-tie clad audience had been removed to make way for a bunch of hairy, sweaty and rowdy people; my kind of people.
Still, the old venue with its balconies, white-and-gold walls and massive chandelier made a perfect setting for an artist who constantly likes to develop and ever change his way of expression. This night he wasn’t giving us the normal rock-show, he was here with the Czech National Symphony Orchestra, and songs re-worked to fit a large orchestra instead the normal guitars-bass- drums line-up which we are used to.
In history, we have seen several rock bands take the step to play together with a symphony orchestra, but to my knowledge none have taken it as far as Tankian did; completely dropping the band and playing solely with the orchestra! Well, not completely dropped, but Dan Monti (acoustic guitar, backing vocals) and Erwin Khachikian (grand piano), both of the F.C.C., were perfectly fitted into the setting of the orchestra, and performed admirably like all the others (although slightly more used to this kind of crowd, that much was obvious).

Serj Tankian served us up with almost all of his Elect The Dead material coupled with musically enhanced poem-reading (the text found at his site with the Borders Are track) and three songs off of his upcoming album Imperfect Harmonies (Gate 21 I knew, and he did say the name of the others, I think, but it was impossible to hear over the crowd); all of which were great in their own way, but standing together they formed an incredible whole, the likes of which has never been seen before.
The music and vocals were well-balanced against each other, and even though little or no room can be left for improvisation while playing with so many people in the cast, Tankian’s special talent for playing with his voice still made the how feel alive and unique, and as Monti put in backing vocals for several of the songs it almost sent shivers down my spine how well they sounded together.
Tankian also took over the grand piano for the new track Gate 21, known from the Elect The Dead Symphony recordings from Auckland, New Zealand, and the song sounded just as good here as it did down under.

The word, above all others, for the day was still joy.
The joy of the crowd was easily seen and heard as arms were raised in unison to clap, feet stomped the floor to ask for more and voices roared out in appreciation, so loud it even drowned out what was coming from the stage.
The joy of the orchestra could not be missed as they beamed light rays of sunshine at the massive response they were getting for the performance (I am guessing their ‘normal’ crowds wouldn’t think of behaving like this), and the F.C.C. members were perfectly happy as well; Khachikian even came out after the show to greet and speak with the fans who were still hanging around.
None was more overjoyed than Tankian himself however; the mastermind behind it and the instigator of this whole event was so intense and immersed you wouldn’t believe unless you saw it with your own eyes; or as Lunah (Lauridsen, our photographer) put it, he looked as though he tried to take so much in that he could hardly be in the present. He was so enthusiastic, little basic thing such as where the stage exit was simply couldn’t fit in (seen as he meant to leave the stage after Beethoven’s Cunt, but ended up right back where he started, where after he tried again and found the correct exit).

The only regret, if one could claim such a feeling after being handed a gift as this, was that the whole show felt a bit short.
Of course, no support band was present, the type of concert made that impossible, but neither was there an actual need for another band. The thing is, that as the sole performer of the evening, and having a set which only lasted for about an hour, I did feel like it was all over almost before it started. I for one could have gone on for much longer, and like an addict I felt the surge, the need to overdose on the combined musical talent gathered in the room. Instead I was left with the sweat dripping from my back, with a cold beer in my hand, and a strong desire to travel the world for a chance at living through this yet again...