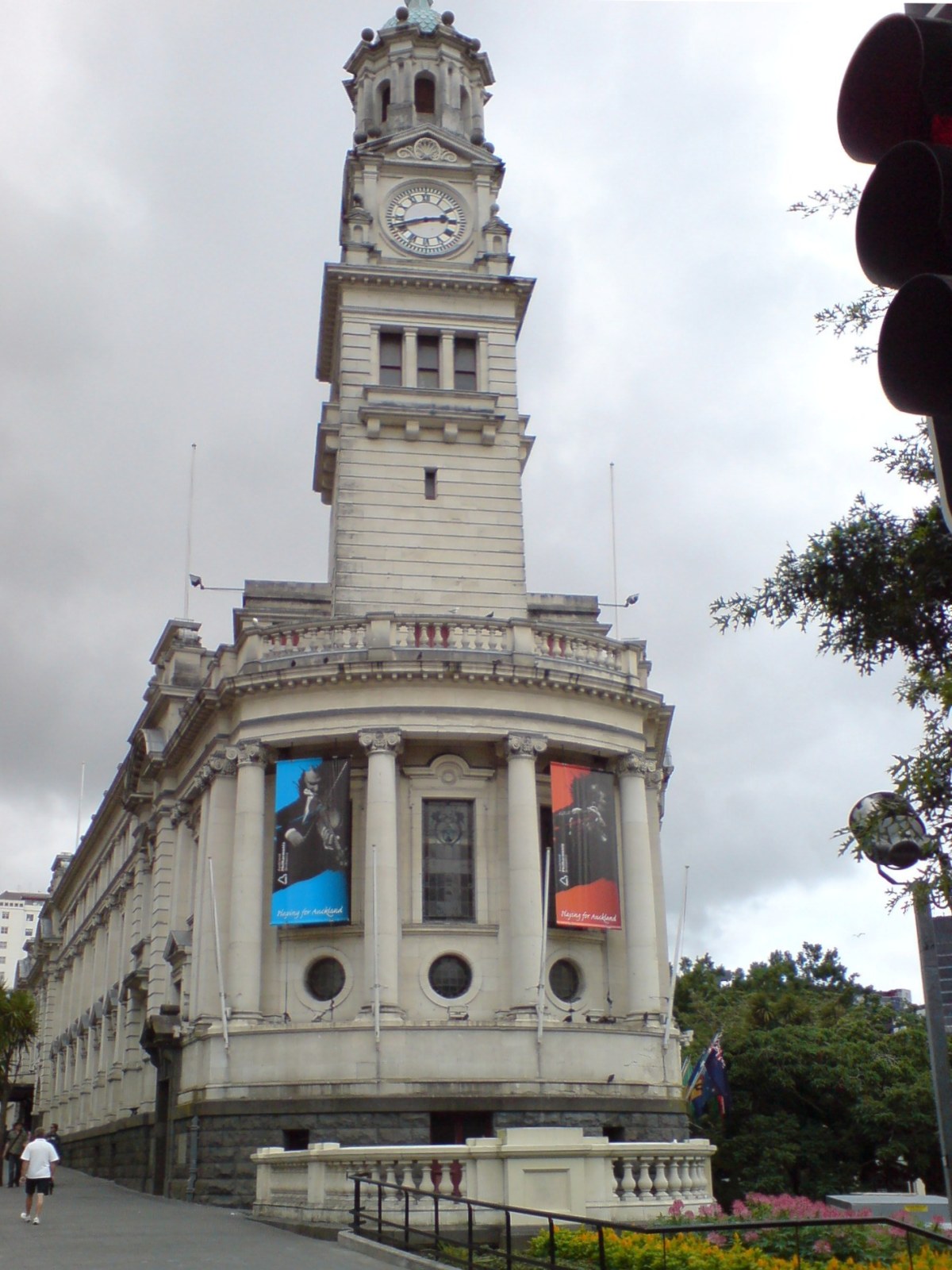 Serj:  Hello Auckland!  You've turned into my second home.  I want to thank you Auckland.  I want to thank the A.P.O. [Auckland Philharmonia Orchestra] ahead of time.  This is one of the most amazing concerts  that I've ever been a part of my whole life.  Thank you for being here.  ?????????.   She's left us for the brightness of tomorrow.  She's nurtured us for 10,000 years.  She's loved us.  She's cared for us.  And she is dying.  Her name is 'Civilization'.
Feed Us
Serj:  Thank you.  This is a song called 'Blue'.
Blue
Serj:  When the snakes land in the sky from beyond.  When we have no longer paid attention to what's going on, the sky will be over.
Sky Is Over
Serj:  Ladies and gentleman, The Auckland Philharmonic [sic] Orchestra.
Lie Lie Lie
Money
Serj:  Oh yeah.  This next song I wrote in Paris years ago in a dream.  So I didn't really write it, the universe wrote it.  And that's what I believe about music.  I bele-I believe it belongs to the universe.  It comes from there.  And it's this beautiful energy that we share that transcends normal flesh existence.  And that we inspire each other through.  So thank you for being a part of this again today.
Baby
Serj:  You guys are fucking beautiful, thank you.  It's one of the best audiences.  It's a song I've never played before.
Gate 21
Serj:  Thank you.
The Charade
Honking Antelope
Serj:  Thank you.
Saving Us
Serj:  Thank you.
Elect The Dead
Serj:  Thank you.  Thank you very much.  Hamish Mckeich, our conductor.  Give it up.  Give it up for the Auckland Philharmonic [sic] Orchestra.  This next song is called 'Falling Stars'.
Falling Stars
Serj:  Thank you.  Commander Dan Monti on guitars, from the F.C.C [Flying Cunts Of Chaos].  Hamish Oliver on piano.  The Auckland Philharmonic [sic] Orchestra ladies and gentleman.  I'd like to invite a, my partner, a good friend of mine, well not partner in that way but, partner on this, on this particular occasion...
Dan Monti:  He's a good friend.
Serj:  My friend John Psathas, who's a, an amazing, amazing arranger, composer from New Zealand.  John where are you?  He helped me arranged, ah-ah, there you are.  John Psathas, ladies and gentleman. I'd like to turn the microphone over to our esteemed conductor Hamish Mckeich.
Hamish Mckeich:  Let's hear it once more for Serj.   Now this uh, the last song we got for you tonight is called 'Beethoven's Cunt'.
Serj:  I really wanted to hear him say that.  Thank you.
Beethoven's Cunt
Serj:  Thank you.  The A.P.O.  Beautiful, thank you guys.  It's an honor.  It's an honor, thank you.  You guys are a beautiful audience.  Thanks for making tonight special, we love you.  Thank you.
Empty Walls
Serj:   You guys are awesome.  Auckland, New Zealand. 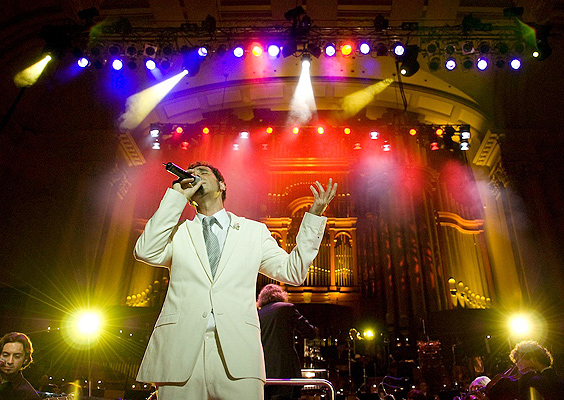 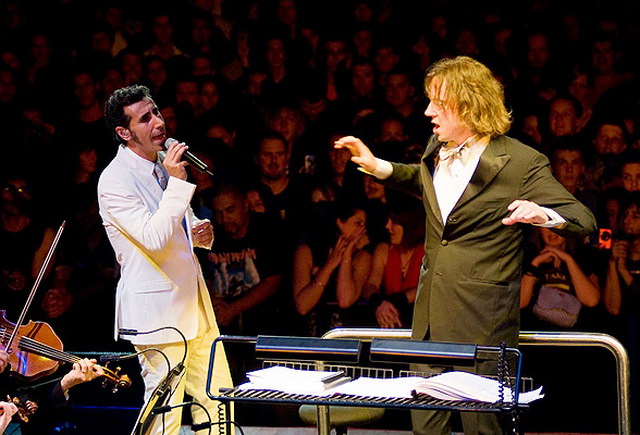 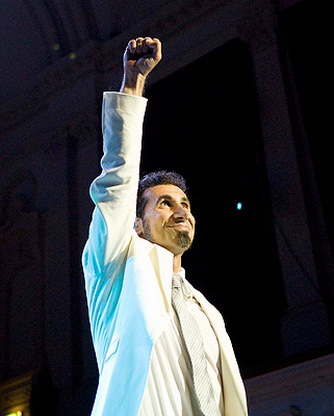 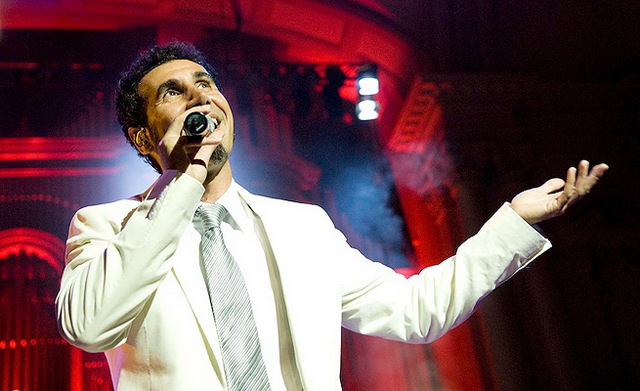 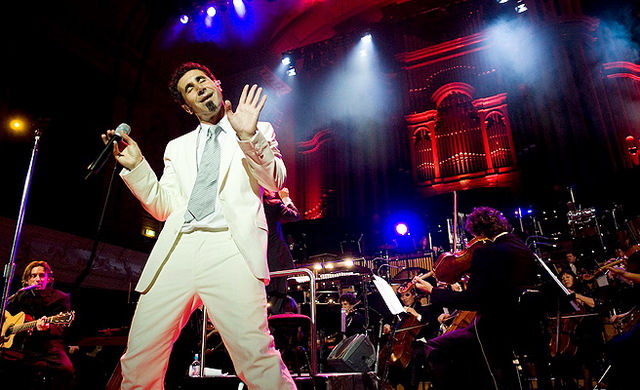 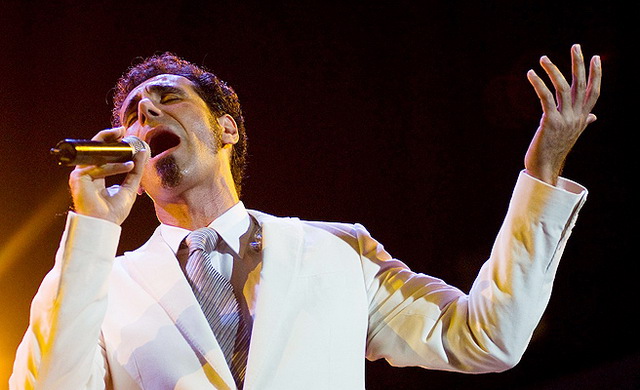 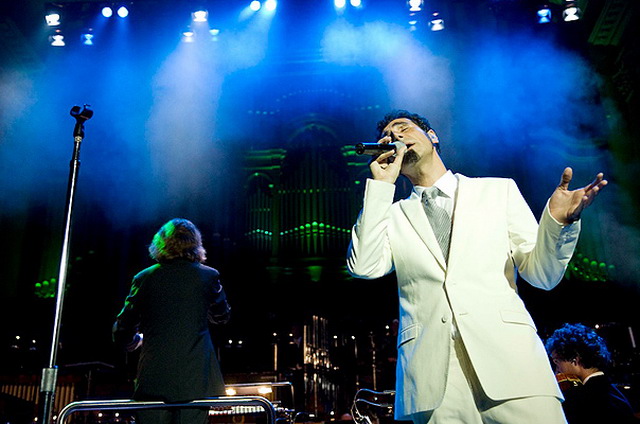 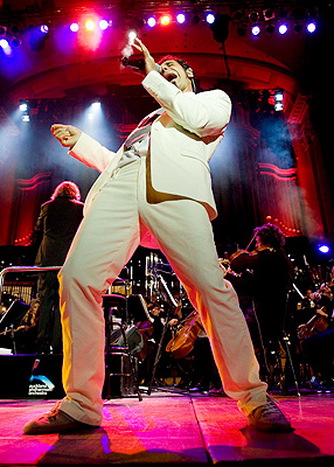 OPINION: There were nothing but highlights as Serj Tankian teamed up with the Auckland Philharmonia Orchestra.

It wouldn't be often that a tuxedo-clad member of the Auckland Philharmonia Orchestra gets the opportunity to "throw up the goat" - the international hand gesture for metal fans - to a crowd.

But when the APO teamed up with Serj Tankian - the big-voiced System of a Down singer who is now performing solo - it wasn't just appropriate, it was almost compulsory.

That's how the night began as the APO took to the stage at Auckland's majestic Town Hall, and the grinning member of the APO's horn section received plenty of cheers - and returned "goats" - from the surprisingly large, and varied, crowd.

It was an odd beginning for a wonderfully odd performance.

It might seem a strange mix on paper, but - over five System of a Down albums and one of his own, 2007's Elect the Dead - Tankian's booming voice has become an instrument of its own.

His operative howls give focus to the frenetic metal riffs that usually accompany his voice.

But, when paired with the intricate melodies and stunning musicianship of the APO, Tankian's vocal range stood out even more.

That was evident from the opening track, his first solo single Empty Walls, as Tankian's recognisable Armenian-tinged hollering was given extra melodrama and poignancy from the soaring strings.

If you were getting chills from the orchestra and their perfectly executed, and frequent, instrumentals, that's because they know exactly what they're doing.

As a result, there were plenty of highlights, like the thrilling cresendo at the end of Feed Us, and the dramatic elements that punctuated Sky Is Over.

Then there was Blue, a non-album track that saw Tankian impressively matching the APO's sonic delivery with a pinpoint falsetto.

The combo didn't mesh quite as well when the rave lights were brought out for the overly frenetic Money, as the intricate flourishes of the orchestra got lost in a sea of noise.

And Baby was a little too wacky, but it was a good opportunity for Tankian to unveil some comical facial expressions and a piercing metal scream like the days of old.

It was a nod to Tankian's rock fans in attendance, but if they wanted a Monday night moshpit fix they would have left disappointed.

For those wanting to be pushed out of their comfort zone, by a performer willing to do just that to himself, there were nothing but highlights.

When Tankian and the APO received a standing ovation, they deserved every second of it.